I often hear people talk about becoming frustrated when shopping in off-price retailers because of what’s described as overwhelming numbers of racks and inventory to sift through. Once you become familiar with the basic floor plan in a particular off-price retail store, though, these stores don’t seem to deviate much from that plan.

You all know I frequent Marshalls and TJ Maxx.  In NYC, these stores are many times larger than my local stores, but the floor plan was familiar. Actually, the inventory was also familiar. I saw all of my most recent purchases—Michael Kors Santorini tote, Michael Kors white resin watch, and some Max Studio dresses.

I especially enjoyed browsing the TJ Maxx on W. 57th Street because it had the Runway at Maxx collection, which is something my local store in KY does not feature. Most of the runway items, even at the TJ Maxx prices, are pricey.  But, I did try on and seriously consider purchasing a Yoana Baraschi silk dress. It was a $99.99. What can I say? I have a weakness for paisley prints.

I passed on this dress because I knew it wouldn’t make my regular wardrobe rotation.  It would also require a minor alteration at the top.

I picked up a couple Michael Kors tees in Marshalls though. 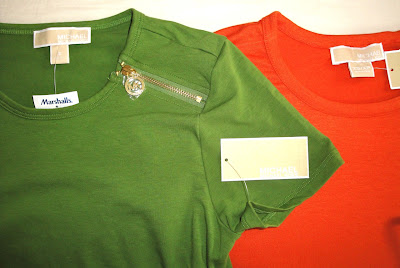 One of the Marshalls stores I entered had several BCBG jackets (but none in my size) for just $39.99.  I wanted a particular bright orange jacket so badly that I considered buying it too small and never zipping it up.  Lol!