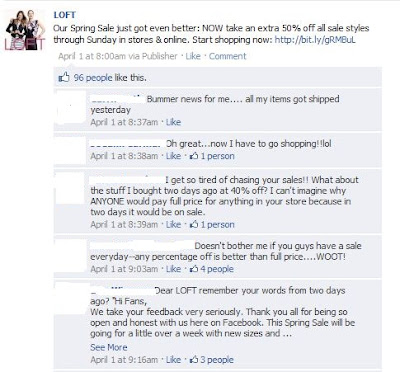 On April 1, 2011, the Loft (via its facebook fanpage) announced the launch of its spring sale, which offered an additional 50% off all sale styles.  96 people “liked” this status, and 20 people felt strongly enough about the announcement to leave a comment.  Almost 50% of the commenters, however, expressed frustrations about the new sale.

One impassioned commenter made the following remark: 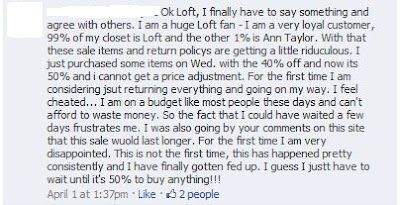 The pricing practice that frustrated the commenter above is called price discrimination, and it is used by many retailers.   Price discrimination occurs when a seller charges different prices for the same product when there is no cost difference in supplying the product.  Teacher discounts at clothing stores, student and older adult discounts at the movie theater, seasonal rates at hotels, bulk-discounts at supermarkets are all examples we see often.

Why would a retailer engage in the practice of price discrimination?  Nonuniform or different pricing usually translates into increased profits for retailers.  As customers, we all have different preferences for products.  A retailer tries to match its prices to the maximum that customers are willing to pay.  Charging different prices maximizes the possibilities for retailers to gain more profits.

Why should bargain shoppers favor price discrimination?  Our demand for many products is elastic and hence increases as prices fall.  We get to pay cheap prices because of price discrimination.  The Loft zip pocket dress (in red passion) retailed for $79.50.  I love that dress, but would have never paid $79.50 for it.  Many customers were willing to pay that price, though, as evidenced by the dress selling out online before it was ever marked down.  The dress eventually went on sale in stores, and when I bought it, I spent $30 (a price lower than what I was even willing to pay, yielding a consumer surplus for myself).

Why were so many commenters upset after reading the Loft facebook announcement?  Well, the Loft let them know that they were charged a higher price for clothing that customers the week of the announcement would have paid less for.  So, they felt cheated.  But, were they?

Savvy customers, those that take the time to seek the best deal, folks that never buy anything without some research (price, preferences, availability, timing, and so on), benefit the most from price discrimination.  Well, savvy customers and, of course, clothing retailers benefit a lot from price discrimination.  I was in line at the Loft on Saturday and the customer ahead of me was buying the same lace tee as I was.  She checked out and did not use the Friends and Family coupon (and the Loft sure did let her).  I purchased the same top as she did, but spent $13 less.  She may not have cared, but I know I would.  Would you?