I’ve wanted the J.Crew Stone Burst Necklace since it appeared online back in January. This necklace had a hip global flavor with its colorful stones, mixed materials, and standout layers. At a starting price of $165, though, I decided to wait for markdowns. Unfortunately, the necklace was so popular that it sold out before I could get one. When I saw, then, that J.Crew Factory released a version of this necklace, I didn’t even hesitate to get one. Of course, the starting price at the Factory store is $64.50, and all jewelry is 40% off there right now. The decision to purchase one was easy.

There’s been some debate about the reappearance of J.Crew styles in the Factory store. Wouldn’t you feel bruised if you paid J.Crew prices for items that later appear at lower prices in the Factory store? There are usually, however, discernible differences in quality between similar items in both stores. The  J.Crew Stone Burst Necklace, for example, is much more opulent than the Factory Double-layer Necklace. I’m such a huge fan of the design, though, that the Factory version is good enough for me. 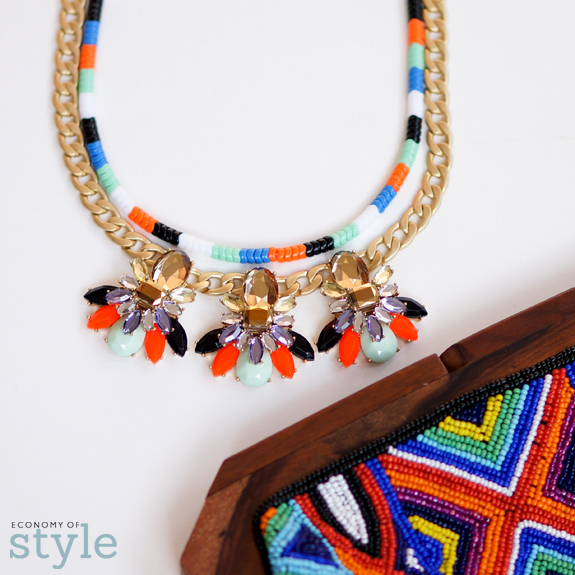 My favorite clutch has been reunited with her long, lost sister.