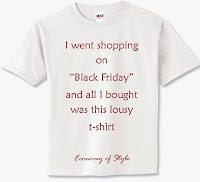 Ok.  That’s not entirely true.  I bought a few items.

Black Friday shopping seems to be more about the social experience than it is about deals.  Most of the places that I usually visit offer similar deals all year.  So, as I walked around, I kept wondering what amazing deals did the folks with the enormous shopping bags find?

I made a morning stop at my local mall to visit Macy’s, The Limited, Gap, and Banana Republic.  I also visited Marshalls and TJ Maxx.

Here’s what I bought. 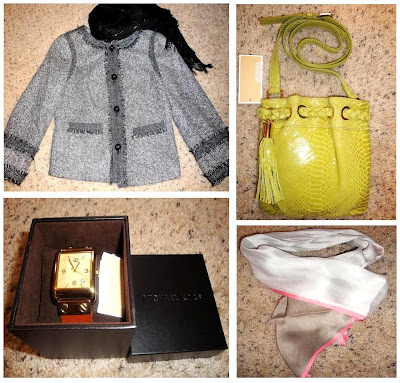 The Limited.  I really enjoyed shopping in the The Limited.  The workers were seriously promoting the available discounts of the day–an extra 40% off the entire store and another 15% off if you are a student, educator, or Limited card holder.  I left with a boucle jacket, a black sequined scarf, and the satisfaction from being able to compound discounts.

Banana Republic.  I have not been drawn to much in BR this fall, but 40% off everything in store was worth a look.  I left with a silk scarf that was on clearance.  FYI:  I tried to use my educator discount in addition to the 40% off and was denied!

Macy’s.  I like browsing INC clothing in Macy’s because they are reasonably priced and go on sale quite frequently.  I left empty handed though.

Gap.  An extra 50% off the entire store (before 8 am) caught my attention.  I have gotten used to stores extending their discounts to the entire day, though, so I strolled into the Gap at about 11am.  That discount was so over.  Once I realized, I made a u-turn out the door.

TJ Maxx.  While I did not find a $399 iPad, my local store hosted a designer bag shopping event.  After about an hour in the store, I think I had about 5 bags (Michael Kors, Cynthia Rowley, Badgley Mischka, B Mankowsky, and Dooney & Bourke) hanging on me.  I realized that I did not really want any of the bags after some serious deliberations.  I did buy a Michael Kors brown leather strap watch though.

Marshalls.  If Marshalls did anything special for Black Friday, I did not notice.  I imagine Marshalls saying, “look here people, it is Black Friday here everyday.”  My store was packed with MK crossbody bags and I left with a green (apple), Braided Grommet style by MICHAEL Michael Kors.